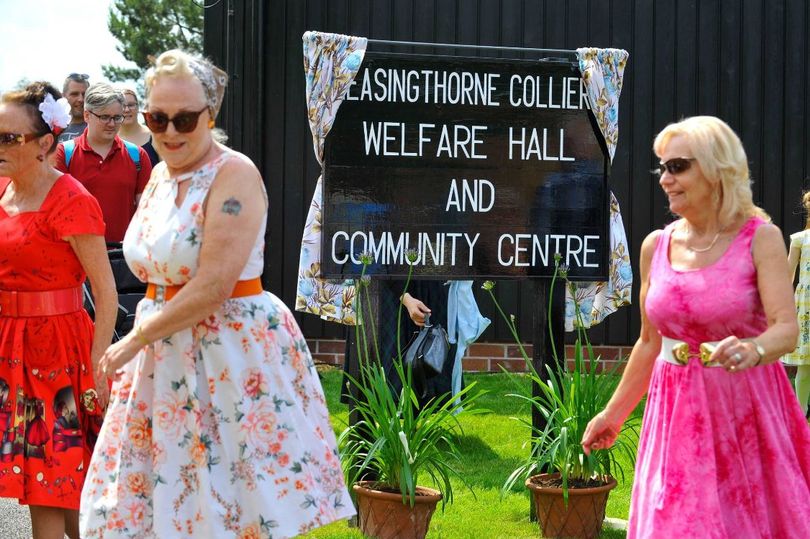 The replica of a County Durham pit village’s community centre is the first of a host of new exhibits at the popular tourist destination .

The 1950s was brought back to life this weekend with the first building officially opened at the new period town at Beamish.

The welfare hall exhibit is a replica of Leasingthorne Colliery Welfare Hall and Community Centre, near Bishop Auckland, which opened in 1957.

The hall is the first part of 1950s town, part of the £20million Remaking Beamish project – the biggest development in the County Durham museum’s history.

The popular tourist destination worked closely with the community members at the original hall – now known as Coundon and Leeholme Community Centre – who shared memories, stories and objects.

The hall will host 1950s activities for visitors to enjoy, including music, dancing, crafts, keep fit and amateur dramatics, and it also features an NHS clinic.

Beamish director Richard Evans said: “It’s an important milestone for us at Beamish as we move into a new time period – and expand the stories we tell of everyday life in the North East.

“It’s a fantastic addition to Beamish for visitors to experience – a lasting tribute to the hard work of all our staff and volunteers as well as the people of Coundon and Leeholme who have helped us. An important story for future generations to enjoy.”

People have shared memories of Leasingthorne Colliery miners paying a weekly contribution towards the hall from their wages.

Pam Hymas, trustee and treasurer of Coundon and Leeholme Community Centre, said: “We have felt proud and privileged to have worked with Beamish and the community.

“They have welcomed the help received from past and present members and the wider community in collecting information, memories and the history from 1957 to 2019.

“This has preserved the heritage of what the miners, their families and villagers achieved and now so many more will be able to see the hall at Beamish.”

A grant from the Banks Community Fund, which is administered by County Durham Community Foundation, has contributed to the costs of the roof of the welfare hall.

Formica Group has donated Formica laminate for the welfare hall’s table tops and kitchen units, featuring recreated patterns from the 1950s, and given advice and guidance about the installation.

The kitchen includes two 1950s wall units and a Dovedale sink, made in a former Spitfire factory after the war.

The unveiling commenced with a grand parade from the museum’s Events Field, through the 1900s Town to the hall, followed by the opening ceremony, including speeches and a tribute to the Leasingthorne miners, read by Coundon and Leeholme Kids 2gether Youth Club.

Aged miners’ homes will provide a centre for older people, including those living with dementia.

The Remaking Beamish project also features a 1950s Farm, bus depot, and an expansion of the Georgian area, including a coaching inn, where visitors will be able to stay overnight, and early industrial buildings, including Joe the Quilter’s cottage, which opened last summer.