Brandon Boxers Up For The Fight In New Competition-Standard Ring 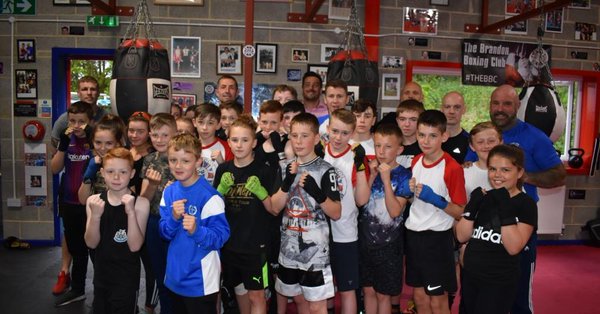 Members of a successful County Durham community boxing club are on their toes after winning a four-figure grant from a regional employer for a new competition-standard boxing ring.

Brandon Boxing Club was set up in 2013 with a view to giving anyone from around the region the chance to get fit and learn new boxing skills, regardless of age, gender or disability, and has well over 100 people accessing its facilities every week.

While its main focus is on maximising participation, Brandon Boxing Club also has a number of members who compete nationally and internationally, with junior boxers Megan Bainbridge, Frankie Lyall and Grace Kenny all winning gold medals at the 2019 Golden Girl Championships, the world’s biggest female boxing competition which took place in Sweden in February.

To help boxers prepare for competitions, the Club had been looking to bring in an International Amateur Boxing Association-standard ring which would replicate the environment in which their competitive fights take place, as well as allow the Club to stage AIBA-recognised events.

And now, thanks to a £5,000 grant from the Durham-headquartered Banks Group’s Banks Community Fund, the new ring has been purchased and installed, alongside a ring timer and dozens of new interlocking gym mats which provide a safer and more stable surface for members to train on.

It’s the second time that Banks has supported Brandon Boxing Club, with a further £5,000 grant given in 2017 enabling the purchase of a second training ring and a range of other boxing and fitness equipment.

Founded by head coach Alex Oliver, the Club moved into a brand new, purpose-built facility at Brandon Sports Club last year, and has extended its operations to include more than 20 classes every week run by its ten qualified coaches which are aimed at anyone from rookies to experienced amateur boxers and other local people simply looking to get some exercise.

The Club’s members mostly hail from the surrounding villages, but its growing reputation is also bringing in boxers from right across County Durham and it now hosts sell-out tournaments at Meadowfield Sports Centre and The Ramside Hall Hotel twice a year.

As well as running the boxing club, Alex Oliver is also involved with raising money for a range of local charities and good causes, including Trinity School in Durham where his daughter Kara-mai is a pupil, and was awarded the British Empire Medal last year for services to charity and to the community.

He says: “We’ve enjoyed a lot of competitive success in recent years and came fifth in the Golden Girl Championships medal table, coming in ahead of lots of countries!

“The more we can do to familiarise our boxers with the conditions they’ll encounter when boxing in competitions, the greater the chance they’ll have of succeeding and having this new ring in place is going to make a massive difference to our preparations.

“The new gym mats provide a safer and more stable surface for our members to train on, which is especially important for young members and those with disabilities.

“The club’s cash reserves go towards helping our boxers and their families meet the costs of attending national and international competitions and we could never afford to make this sort of purchase on our own, which makes the continuing support we’ve had from The Banks Group absolutely invaluable.”

Lewis Stokes, community relations manager at the Banks Group, adds: “Brandon Boxing Club has a massive positive impact on its members and is a brilliant example of everything that a community sports club can be.

“We’re very pleased to be continuing to support such a worthwhile organisation and to be directing more of the revenues generated by the projects we undertake back into County Durham.”

The Banks Community Fund provides grants for community groups and voluntary organisations in the vicinity of Banks Group projects.

Anyone interested in applying for funding should contact James Eaglesham at the Banks Community Fund on 0191 378 6342 to check if their group or project is eligible.