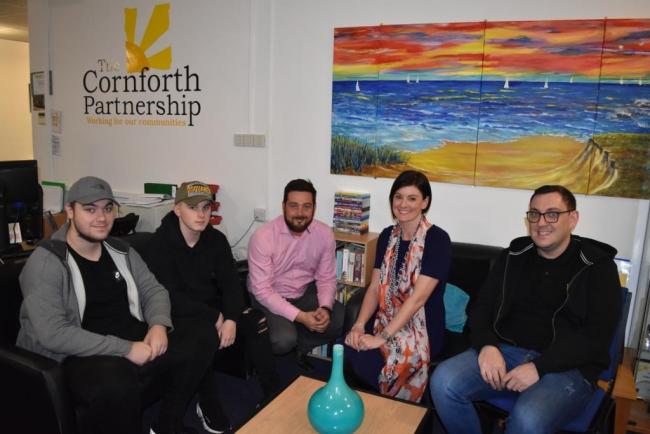 A CHARITY has celebrated its 21st birthday after renovating its headquarters thanks to a funding grant.

The Cornforth Partnership was given a style transformation after it was awarded a £5,000 grant from the Durham-headquartered Banks Group’s Banks Community Fund, as well as additional funding from the 4 Together Area Action Partnership.

The charity works to help create healthy, vibrant and aspirational local communities in Cornforth and the surrounding area.

The donation has allowed it to repaint and recarpet its Cornforth House headquarters in the high street, which hasn’t been redecorated since it first opened in the late 1990s.

Several of the charity’s young service users were involved in choosing the colours and style in which the building was to be redecorated, with a mural added showing a number of local landmarks being included in the final design.

Tony Cutmore, operations manager at The Cornforth Partnership said: “The décor has inevitably started to show its age in recent years and the carpets that we’ve had in place since we opened have clearly needed replacing for some time, but with our priority being to invest in the services we provide, we simply wouldn’t have had the funds available to cover the cost of the required work without the generous support we’ve had from the Banks Community Fund.

“Getting some of our younger users involved in the redecoration gives them a real sense of ownership of the place and the landmarks mural really adds to the sense of community that we look to offer here.

“We’ve had so much positive feedback about how much better Cornforth House now looks and feels, and we’re already seeing more people accessing the building, a trend we hope to see continuing in the future.”

The grant has funded new furniture into the seating areas around the building to make them more welcoming and comfortable, and the charity is expecting the refurbishment to help increase the number of people coming into the building, whether for participating in its various projects or hiring it for their own events.

A number of the charity’s services are delivered in community venues in the area, including the Monday night youth club based at Bishop Middleham Village Hall.